X
This site uses cookies to provide and improve your shopping experience. If you want to benefit from this improved service, please opt-in.
More Info
Accept Cookies
All Orders Being Processed As Normal
Free UK Standard Postage On Orders Over £75*
Next Day UK Delivery Available - Order by 3pm
Free Click & Collect In Store 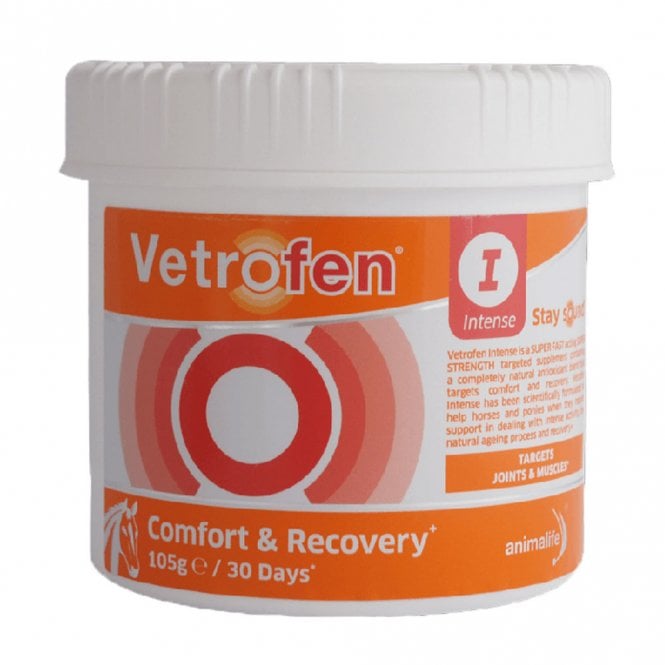 Animalife Vetrofen Intense is a fast acting, super strength, targeted supplement containing a natural antioxidant blend that targets comfort and recovery in joints and muscles. Vetrofen Intense has been scientifically formulated to help horses and ponies that require support in dealing with intense activity, the natural ageing process and recovery. Use before and after periods of physical stress or intense activity. Great for joints, muscles, ligaments, and tendons when used daily starting with a loading serve. Vetrofen Intense does not contain Devil's Claw and is free from banned substances making it safe to use with the performance horse.

Vetrofen Intense is a proprietary blend of Scutellaria baicalensis and Acacia catechu. These plants have been used in foods and health products for thousands of years in other countries, especially in Japan and China. The two key ingredients in Vetrofen Intense have been studied extensively around the world and are recognized for their ability to support the body’s natural inflammatory response as well as being potent antioxidants and free radical scavengers that are fast acting, effective and safe.

Vetrofen Intense is for short or long term support. It can be used daily when mixed into the horse’s normal feed or specifically during intense periods with the Intense Instant syringes, such as before, during and after competition.